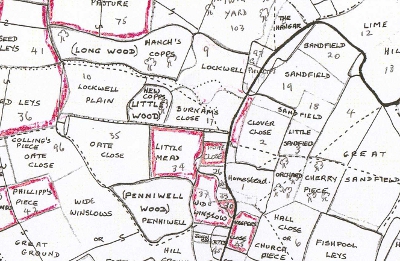 1703 map as drawn by Anne Cole in 1995 showing these boundaries
Land holding in 1699 terrier, shown in pink by Mavis Curtis

The way of identifying an area of land has over the centuries been by naming it according to its characteristics. John Field has analysed the origin of English field names and has found several general categories which cover the majority of field names. When applied to the current 2008 map of Elsfield used by the people who now farm the land, we can see both continuity and change as the needs of the farming community change. The size of fields which were common at the beginning of the 20th century were described by William Buchan (1982:40) as ‘small fields with their tall hedges, the neat woodlands, the gentle slopes and secret glades of that unspectacular but intimately beautiful countryside’. These have given way to much larger fields to cater for the machinery which is now used. In consequence some names have disappeared completely while others have migrated or expanded to cover a wider area than before.

The following categories of field name appear to be relevant to the fields in Elsfield:

Size names are common. The 40 acre field which appears on the 1919 map in Clark’s The Manor of Elsfield is in 1703 known as either the 40 acre or by the alternative name ‘Wide Winslows’ and in 2008 has become part of Hill Ground.

‘Hanging’ means ‘on a slope’ and we have The Hangers, which are sloping, and Hanging Char Hill which is on a much steeper slope and maintains its name from 1703 to the present day. The Hangers is one of the oldest names in the parish, appearing in 1273 as Le hangynde.

‘Hamm’ often refers to land in the bend of a river. We have ‘The Ham’ in 2008 but it appears to be what in 1703 was called Middle Ground. It is not even near the Bayswater Brook. However, it is next to Shivery Sham, a name still in use which must be a corruption of Sheepridgeham, which appears in 1703, so perhaps the name the Ham has become detached from the longer name and moved slightly to the north.

‘Close’ refers to a narrow field near the village or next to a house. It is linked either to a crop or a person. There are no closes mentioned before 1703 but by then there is Barley Close, Clover Close, Oate Close, Hall Close, Steven’s Close, Keeper’s Close and Little Close.

In 2008 Barley Close is still so named. Crops such as wheat, barley, and oats were much improved from the 16th century onwards and in the 17th century a very influential book by Walter Blith suggested ploughing up pasture and sowing sainfoin and clover. ‘Sainfoin piece’ is a common term and dates from this time. There is no mention of sainfoin in either the 1703 map or the 2008 one, but it does appear in Keith Bradford’s farming diaries and is opposite Lyme Hill next to Ridings Wood.

Oate Close has become Oak Close, understandable since there are oak trees growing there. Clover Close has become the Home Close on the opposite side of the road from Burnhams , part of which now belongs to the house known as Home Close.

Keeper’s Close has become Vicar’s Field. It is next to what was the Vicarage but is now Glebe House and was rented in the 19th century by the Reverend Gordon from the then landowners, the North family. Steven’s Close has become Barn Close, because this is where the large barn accommodating Hill Farm was situated and the barn has been converted to a house – Barn House.

Sandfield. In 1793 there were two fields called Sand Field, one called Great Sandfield and another Little Sandfield. On the present day map they are divided into Sandfield, Brierly Furlong and Home Close. The land is very sandy, as the name tells us, and in earlier times was thought more suitable for grazing sheep rather than the arable land it now is.

Lyme Hill. This may refer to burning limestone to make quick lime. Sometimes, though, it is a corruption of ‘lyn’, flax. It appears as Lime Hill in 1628 but is listed as a coppice. It changes its name slightly in 1703 to become Lyne Hill, which it maintains in the 1919 map but has changed back to Lyme Hill by 2008.

Lockles. This is a name in 2008 which has relocated itself somewhat from 1703, where it is called Lockwell and Lockwell Plain. Ann Cole is of the opinion that it refers to a spring: Lock Well, since there is a spring in the field originally called Lockwell. It has now been incorporated into Hange. Lockwell Plain and Seed Leys in 1703 are now known as Lockles.

Furze is a name which has over the intervening centuries become Fuzz. When land was enclosed sometimes fields were planted with cover for foxes, to ensure good hunting. This may apply to the Furze pasture identified in 1703. Hunting was still part of the village scene in the 1900s when the Squire, Mr Parsons, took some of the older boys out of school to help with the hunt and the shoot.

Bendbrook is a name which is no longer in use. It was farmed in 1703 by a Mrs G. Fellowes and is now called Stretchfield.

Carrot Hill appears only on the latest map and must have been named in the later part of the 20th century.

Sheep Cut Piece. ‘Cut’ is a name often found in Oxfordshire. Its probable equivalent is ‘lot’, referring to land redistributed at the time of the enclosure. It is called ‘Sheep cat piece’ in 2008. A small flock of sheep is kept in Elsfield now but arable farming is more financially viable than sheep farming. The 19th century censuses list the occupation of shepherd, sometimes more than one, who often lived at the cottages near Sheep Cat Piece in Lower Swarth. Sheep farming was an important part of the agricultural economy in Elsfield in the first half of the 20th century, with Oxfordshire Downs sheep being bred.

Green pastures. Pasture is or was grazing land for animals. It features in the 1703 map and is still extant in 2008. There is a biblical reference here: Psalm 23 ‘The Lord is my shepherd, I shall not want. He maketh me to lie down in green pastures, He leadeth me beside the still waters.’

Tin shed. This is a modern name for part of a field named Horse Copps in 1703.

Gurdon’s Ground. ‘Ground’ often refers to land enclosed in the 15th and 16th century. Gurdon’s Ground lies next to the Ham. The Gurdon family are mentioned in 1703, though it is not clear from the map which land they farmed. John Gurdon appears on the list of tenant farmers paying rent to Lord North in 1825. He farmed 63.16 acres. In the 19th century the family was still living in Elsfield and in the 1851 census are listed as corn merchants. There was a bakery called Gurdons in nearby Summertown until late into the 20th century, and the maiden name of Mrs Taylor, wife of the Christ Church librarian who occupied Home Farm from 1946 to the 1960s was Gurdon.

Burnhams was so called in 1703 and is still called that today.

Woodcock’s Close near Forest Farm refers to a person, not the bird, and Mrs Taylor’s, at what is now Dove House, was the wife of the librarian of Christ Church for whom Home Farm was modernised after the death of Miss Parsons in 1944.

Sometimes references to the church mean that that land was put aside to support the poor of the parish. The field known as Sermons Close on the 2008 map does not appear to have any connection with the church, which has Vicar’s Field lying adjacent to it, and may refer to a person.

Of the Prior’s Furze or Prior’s Hill Corner which appear on the 1629 list of names there is no trace in 1703 so we have no means of knowing where the fields were.

The term Long swathe is used for two fields on the 1703 map. One of these has become Lower Swarth and is the only survival in 2008. Meadowland was sometimes measured in swathes. A swathe was roughly 10ft across, being the reach of a man scything from left to right.

Washbrook is the name given to a stretch of the Bayswater Brook and a field adjoining it. It does not appear in the 1919 map, or the 1703 map and it appears to have been used to wash the sheep rather than dipping them, which would, of course, have polluted the stream.

There is no clear example of public administration but there is what appears to be a reference to the adjoining parish of Marston. The field nearest the parish boundary on the 1703 map is called Marston Cross Ground, which may be a reference to the fact that it is immediately across Elsfield parish boundary marked by the Bayswater Brook. This name has changed by 2008 to Masons Cross, but seems unlikely to refer to masonry even given the fact that stone was taken from Elsfield quarry to Oxford in the 13th century. One would have expected the name to have appeared in earlier documents if it referred to masons or masonry.