In 2007 the roof of Manor Cottages was re-thatched by Russell and Buckingham, a firm based in Bicester. They travel as far as Surrey and as far south as Andover to work as there is quite a lot of competition for thatching. 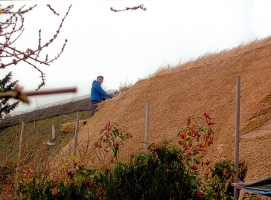 The straw they use is combed wheat grown near Basingstoke specially for thatching. The soil it is grown in has to be low in nitrogen, otherwise the straw will rot easily. It is planted in November and is ready for cutting in March. It is packed in bales containing 20 bundles, tied round with plastic tape and costs £700 a ton. The ears of wheat are still on the straw so the roof has to be netted to keep the birds and rodents off. 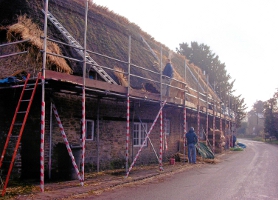 When re-thatching, they take off the old netting and strip some of the eave line (the bottom edge of the thatch) off to decide how much new straw to put on. They lay the new straw straight on top of the old straw. There are two layers of thatch, which is the typical style for Oxfordshire. It lasts for 20 to 25 years though the ridge will need repairing in 10 to 12 years’ time. The ridge is formed by taking a six-foot long wrap over (or ridge roll) and bending it in two so it forms a V shape. The bundles of thatch are held in place by spars made of willow or hazel, which have a lot of spring in them. A spar is like a giant hairpin and is made by taking a length of wood and twisting and bending it.

The tools used by the thatchers are