The Manor came onto the market at a difficult time in the 1970s. The house and extensive grounds were expensive to maintain and it was not easy to find a buyer. Having been left empty for several years, the house was in a state of considerable disrepair. Drain pipes were clogged up and this had led to the basement being so damp that both dry and wet rot had set in and played havoc with the walls and floors.

It was finally sold to a consortium of idealists, pioneers who wanted to set up a different and challenging kind of home. The main protagonist was a teacher at Park Hospital School and amateur ceramicist, Don McNeil, who, having discussed it with Mrs Lane, went on to advertise for partners in the Oxford papers. Although he received forty replies, only three other partners could be found. They were a colleague at the school, Mary Barr and her Canadian engineer husband Matthew, Robert Booth, a lecturer at Oxford Polytechnic, and Duncan Kilgour, a lawyer.

At the time, Michael Haynes, the present incumbent of the ground floor flat, had set up residential studios and workshops with a gallery for fine and applied artists in the Manor House at Stow on the Wold and, as luck would have it, had come into contact with one of the granddaughters of Lady Tweedsmuir who had applied for a place there.

Michael was well known for his organisational skills in setting up museums and display spaces. He had designed a window display dedicated to Sir Winston Churchill at the time of the great man’s death, and Lady Churchill was so struck with the design when she was driving past the shop that she had told the chauffeur to stop the car, had gone into the shop and asked who had designed the display. Lady Churchill then asked Michael to design the museum at Chartwell.

In 1971, Michael had set up a similar studio to the one in Stow in Wandsworth, which he still runs. He was invited to give advice on setting up the project at Elsfield Manor. Several of the participants had creative aspirations but they were not professional artists.

The site proved much more expensive to convert and maintain than the consortium had expected. The heating alone, provided by an aged oil-fuelled boiler, cost £50 a day to run. For Michael Haynes, however, it was an ideal place to live. He was at that time searching for a new home and the Manor provided easy access to his London workshop. In addition and more importantly, he loved the house and its setting. He felt it would provide a perfect place to escape from his London world and unwind, as well as an excellent place to house his growing collection of modern art. He contacted Lady Tweedsmuir, who, aged 94, was living in Burford. She gave him a photograph of her husband taken by the Canadian photographer Karsh in 1937, and since that day John Buchan’s stern and steady gaze has looked down on anyone entering the front door of the Manor, a reminder, if one were needed, of that most prolific of writers. 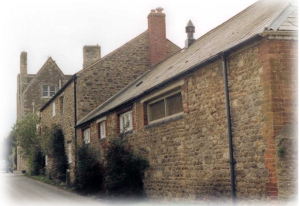 While the first occupants may have been idealists and dreamers, they had two important assets: they were not business men and they were short of money. This meant that the house was left relatively unscathed. While the house itself was divided horizontally into three flats, the rooms were not subdivided to make as much use of the space as possible, and the alterations were kept simple. The house thus maintains its original gracious proportions, with high ceilings, large rooms, and floor to ceiling book cases dating from John Buchan’s time. The barn, the oldest building on the site, and possibly the oldest building in the village, which housed the laundry when the Buchans were living there, was converted into a house while the fifth building, the stables, was also converted into a domestic building.

In 1983, Michael Haynes hit the headlines again with his ‘transparent fantasy’ – he has made stunning furniture from Perspex, on which he has painted geometric patterns. The large and beautiful rooms at the Manor supply an unusual background for these strikingly modern and original designs, and demonstrate in a very concrete form the excitement aroused in him by his beautiful home.