The Governor-Generalship of Canada

In June 1933, the Minutes of the WI, which up to this date had been signed by Susan Buchan now became signed by Susan Tweedsmuir and in July of that year she resigned as President, her place being taken by Miss Helena Deneke. The Buchans’ life in Elsfield was curtailed by John Buchan’s (now Lord Tweedsmuir’s) appointment as Governor-General of Canada. In 1935, Mrs Clinkard “gave thanks to Lady Tweedsmuir on behalf of the WI for all her kindnesses for the last fifteen years and gave her best wishes for her new life”. It must have been an emotional meeting, saying goodbye to someone who had been such an important member of the group. No doubt Lady Tweedsmuir promised to keep in touch, and this she did with cables from Canada which were read out at meetings. The branch also agreed to correspond with a Canadian branch of the WI.

The Tweedsmuirs, accompanied by their daughter Alice and her husband and William Buchan, caught the Liverpool boat train at Euston and Susan, unhappy to be leaving her many friends and family in England, cried most of the way to Crewe. From Liverpool, the Buchans sailed on the Duchess of Richmond for their new life in Canada.

It is cheering to know that Lady Tweedsmuir did not remain in the sad state of mind in which she left England. In Canada, she seems to have shown the same openness to people as she showed on first coming to Elsfield. Leah Chandler, now in her eighties but forever young in spirit, recalls an encounter with her in the settlement of Spirit River where the Tweedsmuirs’ train had stopped for the night. “As children,” she writes, “we often played on the station platform and we had become friendly with one of the train’s conductors. He told us that if we stood in a certain spot we would maybe see her as she passed from the dining car to the sleeper.” 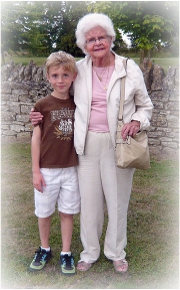 Leah Chandler and her nephew, Nathan

However, much to the children’s excitement, they not only saw her but she stopped to speak to them. Her lady-in-waiting was instructed to give the children some sweets and Lady Tweedsmuir said to Leah, “I shan’t forget you, little girl”. A short time later, a book arrived inscribed To the Little Girl in Spirit River.

Much later in Leah’s life, when she had children of her own about the same age as she had been then, it occurred to her that she had never thanked Lady Tweedsmuir for her gift, so she promptly did so. She was surprised and moved to receive a letter from her in reply saying that indeed she did still remember the ‘little girl from Spirit River’. They continued to correspond on an irregular basis until Susan Tweedsmuir’s death in 1977. Leah still cherishes her copy of A Winter Bouquet sent to her by Lady Tweedsmuir.

Leah visited Elsfield in 2011 and was pleased to see the grave of Lady Tweedsmuir. She left flowers as a mark of her affection.

More about John and Susan Buchan’s time in Canada