History > Elsfield in the 20th Century > The Rothschild Years

The following are found in this section: 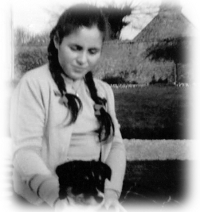 Mrs Lane, who bought the Manor in 1953, was a member of the Rothschild family. She was born in the Chilterns and lived much of her subsequent life there, but owned the Manor for twenty years, buying it in 1953, a few years before divorcing her husband. She came to Elsfield, it is said, so her children could attend school in Oxford, a short car journey away.

When she bought the Manor, a great deal of work needed doing. The kitchen floor needed shoring up, and since she chose not to turn Mrs Webb and Mrs Paintin and Ruth out of their cottages, she had to have accommodation made for her German maids. The stable block was adapted and they slept over the stable, where Lady Tweedsmuir had kept her apples.

Mrs Lane and her own children, Charlie, Charlotte and Rosie, moved into the Manor along with Mrs Lane’s two wards, Jo and Ben, the children of a friend who had died. Mrs Westheimer, a relative, also took up residence and they were looked after by a maid, Mrs Morris, Mrs Evans, the cook, Mrs. Huber, a parlour maid, Miss Foster, a nurse and a secretary, Mary Smith. There were also several German maids who lived above the stables.

Mrs Lane was a vegetarian who wore leather-free boots and must have cut an exotic figure in Elsfield in her Tyrolean dress. The land she owned was managed in the 1960s by James Garson, the farmer at Hill Farm. She would discuss the management of the land in her bedroom, which seems to have been a central feature of her life at Elsfield, as she also kept her collection of fleas there in plastic bags so the children wouldn’t disturb them. This interest sprang from her father’s collection. She was the daughter of Charles Rothschild who died when she was fifteen, and she spent much of her adult life cataloguing his collection of fleas. The work she did on it spread to six volumes and in later life, Richard Fortey, a curator at the National History Museum, recounts how she would arrive at the museum in a battered old Rolls Royce garbed in a voluminous black dress and gumboots. She was known as ‘The Queen Bee’.

Mrs Lane held strong views on conservation and likened the countryside to a snooker table with its smooth green sterile fields. She felt that gardeners should allow weeds to flourish and her views influenced HRH the Prince of Wales who developed her ideas at Highgrove. Mrs Lane herself provided seed for his wild flower meadow, planted them herself in the property she owned in Northamptonshire though there does not appear to be any such area of wild flowers at the Manor now, and at one time planted up a by-pass with primroses, cowslips, ladies smock and buttercups. There must surely have been a certain amount of disagreement and lack of understanding between her and James Garson, even if unexpressed, for James was a farmer and land consultant whose job it was to produce as much food from a given amount of soil as possible. This did not accord with Mrs Lane’s ideas of how to manage Nature.

Lacking any formal education, as a young woman Miriam Rothschild had worked at Bletchley Park on code-breaking and throughout a lifetime of scholarship collected eight honorary doctorates for her work not only on fleas but on butterflies and odoriferous chemicals called pyrazines which are widespread in Nature and play a part in triggering brain functions such as memory and alertness. She said, ‘People really do benefit from contact with plants, animals, birds and butterflies. Without them we are a deprived species’. She was elected a Fellow of the Royal Society in 1985 and made a Dame in 2000.

In adult life, her daughter Rosie became a noted psychotherapist, art historian and feminist, becoming editor of the Arts section of the feminist publication Spare Rib. After writing a book on the history of embroidery, she qualified as a psychotherapist and established a thriving psychotherapy practice.

The Lane family still owns two cottages in Elsfield, Rosie’s Cottage, which until her death in 2010 was owned by Miriam’s daughter Rosie, and Garden Cottage, owned by her son Charles.

Further Information about Elsfield Manor on the Rothschild website