History > Elsfield in the 20th Century > The Buchan Years

The following are found in this section: 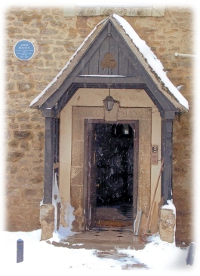 1919 was a momentous year for Elsfield. Not only had the war ended and families could start to rebuild their lives, but the estate was sold by the Parsons family. The Oxford College of Christ Church bought it, perhaps remembering that in the 13th century some of the land in the parish had been owned by and farmed for St Frideswides. They almost immediately split off the Manor and its attendant outbuildings and twenty acres of land surrounding the house which they sold to John Buchan, the writer, journalist and politician.

During the war, poets such as Sassoon, Blunden and Brooke had presented the pastoral landscape of England as a healing power in contrast with the horror and waste of Flanders fields. Buchan was too old to be conscripted into the army but he had visited the Western Front and seen for himself the carnage and destruction the war had wreaked. Many of his friends from Oxford days had been killed. He wrote: “The war left me with an intense craving for a country life” and he purchased the “little manor of Elsfield” and speaks with delight of the countryside around Elsfield:

“Our ridge was old forest land and it provided one of the two types of landscape which have always had a special charm for me… the mountain meadow and the woodland clearing… Elsfield was rich in those secret glades, sometimes only an acre wide, but all ancient clearings whose turf had been cropped for centuries. Summer never dulled their verdure, for there was water in most of them, and in autumn their fringes were a riot of berries. One could find primroses there every month of the year.”

As we can see, Buchan had a great affection for the countryside around Oxford, which he already knew from his days at Brasenose College. His arrival from Glasgow University in 1895 had catapulted him into the midst of the English establishment. There he had met people who were to be important in his career and social life. Some of them, such as Raymond Asquith, son of Prime Minister Herbert Asquith, and Tommy Nelson, whose family owned the publishing firm Nelsons, of which Buchan would become a director, Aubrey Herbert, nephew of Lord Cowper and second son of the Earl of Caernarvon, famed for his roof climbing exploits and a possible model for Sandy Arbuthnot in Greenmantle had all been killed in the war. Others, though, would be regular visitors to Elsfield while the Buchans lived there. 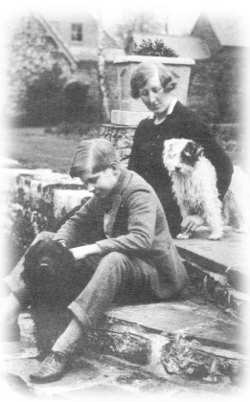 When the Buchan family moved into the Manor they brought with them their four young children, Alice, Johnnie, William and Alastair. Susan Buchan had been a Grosvenor before her marriage, but from a relatively impoverished branch of the family. Her father worked for the Sun Life Insurance Company, though we can assume he did not go from door to door collecting subscriptions. He was in the highest echelons of the organisation and eventually became its chairman. Susan had spent much of her young life in her paternal grandparents’ home, Moor Park, a Palladian mansion in Hertfordshire. John Buchan’s mother was not pleased when they announced their engagement, as Susan Grosvenor represented two of the organisations she hated most: the Church of England and the Aristocracy.

John and Susan Buchan assumed the responsibilities of the incumbent of the Manor with the energy and dedication they had demonstrated in other walks of life. They continued the system which the Parsons family had begun, taking on board the welfare of their employees and taking an important part in village life. In return, villagers took the whole family to their hearts, basking in the reflected glory of being connected to such an illustrious family. They were ‘comers-in’ but had every intention of being accepted by the residents.

While John Buchan presented a public face to the world, inviting famous friends from the many aspects of his working life, it was Susan Buchan who, besides nurturing her family, supported her husband’s career by the hospitality she offered. She was a woman schooled in the duties of a society hostess and aware of the significance this could have in furthering a husband’s reputation. Writing about house parties before the first world war she writes,

“In a gathering of people selected by a really clever hostess there might be one or two Cabinet Ministers who welcomed the opportunity of quiet conversation or there (could) be a Viceroy or high official…These parties often included a diplomat home on leave, a painter, and almost certainly a musician who played to some of the company in the evening. Besides these eminent people there was usually a sprinkling of women famous for their beauty and wit.”

She knew the importance of networking, and when she came to Elsfield set about organizing house parties which would be not only enjoyable but useful to her husband and their guests. Every weekend there was a constant flow of visitors to Elsfield Manor: colleagues and friends of the Buchans and students from the various Oxford colleges, though not musicians as neither John Buchan nor his wife had any musical gifts. The smooth running of these events was in no small measure due to Mrs Charlett, the cook, of whom Susan Buchan speaks very highly. She says, “On Sundays we sometimes. had twenty or more undergraduates to tea. Through it all Mrs Charlett maintained a complete and imperturbable calm, and was always ready to surmount any difficulty which might occur… Such service as she has given us is beyond repayment”.

Unlike when the Parsons family lived at the Manor, there were housemaids from the village, Mabel and Dorothy Chaulk being two of them, sisters recruited during the 1930s. Mabel remembers that they had to be “quiet as mice” as they did their work so as not to interrupt John Buchan’s writing. They were allowed Sunday off every other week but were obliged to go to church. If they failed to do so, they were severely reprimanded. John Buchan sat at the front of the church surrounded by his household and always did the readings. When King George V died, Mabel, along with all the other Elsfield children, was given a copy of John Buchan’s book The King’s Grace, though it is difficult to imagine Mabel having any interest in a book such as this. It contains a great deal about the political situation during the King’s reign, not a topic to grab the attention of a fourteen year old.

Not only was Susan Buchan concerned to support her husband in all his varied responsibilities. She also turned her face towards the village, involving herself with not just the physical well being of the residents, but the social and educational aspects of the women’s lives. She did this through the Women’s Institute, the Elsfield branch of which she founded the year after her arrival in the village.

However, if the Buchans contributed to village life, the village and its environs gave a considerable amount back. To Susan Buchan, they gave friendship and support. To John Buchan, they gave a knowledge of English country life which he used to good effect in his novels. The idea of ‘an older England’ crops up time and again not only in Buchan’s fiction but also in what the rest of the family write. The idea that people who live close to the soil can and have survived in spite of whatever political system is in place and that they provide a network of support for one another which stretches across the land from village to village, unnoticed by their political masters.

“These rogues have their ears very near to the ground and hear much which other men miss”, Buchan writes of the vagabonds who form a sort of unofficial Masonic lodge in Blanket of the Dark. “They have knowledge which the King’s Council could not buy for gold. Also they are strong and secret, and throng as a swarm of bees, and they cover all England.”

The idea crops up again in Midwinter and Susan Buchan herself writing in 1954 says that in spite of all the modern conveniences which have come to village life, radio, television and farm mechanisation, planners for rural England “often strike something primeval, some up-surge from a far older world, when the community draws together impalpably but implacably against the invaders, and defeats their plans and well-meant schemes.”

John Buchan had shooting rights in all the woods within the parish: Pennywell, Long Wood and Woodeaton Wood, as well as Stowood, which is just beyond the parish boundary, so he knew the woodlands well. He uses the woods around Elsfield as the setting for the beginning and end of Blanket of the Dark, set in the days of Henry the Eigth and the dissolution of the monasteries.

“The place was quiet. It had the scent of all woodland places in high summer –mosses, lush foliage, moist earth which has had its odours drawn out by a strong sun. There was also a faint sweetness of cut hay from the distant Woodeaton fields, and something aromatic and dry, which was the savour of stone and tile and ancient rumbling mortar.”

His relationship to the land he owned in Elsfield is well expressed at the beginning of The Three Hostages.

“It was still mid-March, one of those spring days when noon is like May, and only the cold pearly haze at sunset warns a man that he is not done with winter. The season was absurdly early, for the blackthorn was in flower and the hedge roots were full of primroses. The partridges were paired, the rooks were well on with their nests and the meadows were full of shimmering grey flocks of fieldfares on their way north… It was jolly to see the world coming to life again, and to remember that this patch of England was my own, and all these wild things, so to speak, members of my little household.”

Midwinter, too, starts off in this part of the world, and though the main character spends much of the novel on a journey, one of the characters he meets is Samuel Johnson before he is famous, and Johnson was, of course, a visitor to the Manor in the 18th century.