Today, at a superficial glance, Elsfield looks very much as it must have done at the end of the 19th century. In the last hundred years the only addition to the housing stock has been six houses built for farm workers and one more substantial house built by a Christ Church Clerk of Works in the 1960s. The most noticeable change has been in the surrounding countryside, which is now almost completely arable, with wheat and oil seed rape being the principle crops. This move away from mixed farming and the use of machinery rather than the horses, which were used in great numbers, has meant that barns and farm buildings have become redundant and have had to be put to other uses. A Montessori school has been established in one set of barns, another has been converted into a house while a third has become a riding stable, so making some of the fields in the village revert to their original use, pasture for horses.

The cottages which in war time were once so crowded there was no space for evacuees have been extended or amalgamated to provide for a more affluent life style, with a great deal more living space for the inhabitants and their belongings.

The countryside itself has emptied, and apart from a solitary farming family the people of Elsfield no longer till the land. Harvesting, which used to occupy the whole village, adults and children alike, is now done by the one family and haymaking has disappeared. 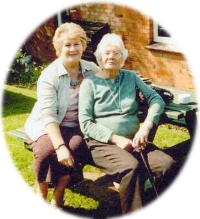 George Hambidge died on 17th August 2008. He was buried in the church yard in Elsfield on 27th August following a moving service giving thanks for his life. The church was very full and it seemed particularly appropriate to sing ‘We plough the fields and scatter’, a harvest hymn which exactly described an important part of George’s life. George contributed a great deal to the life of Elsfield and it is fitting that he is buried in the village where he spent his childhood and working life. Although moving to Marston when his farming work finished, he still retained a feeling of belonging which brought him back up the hill to his final resting place. His wife Audrey and their children return when there are events in the village, as does Anne Paton, who plays an important part in money raising for the church.

James Garson also died in December 2008 and is buried in the churchyard. His memorial service took place at Christ Church, and the cathedral was full with friends from far and near. He had always enjoyed a party and the thought crossed some people’s minds that he would have enjoyed the get-together at Christ Church. Having tilled the land around Elsfield for more than thirty years, James belonged in the village and had made himself a part of village life. Though not born here, the Bradfords, too, consider themselves part of the village, though their daughter, who was born in Elsfield had to move away when the cottage she rented was sold.

A party was held on the Garsons’ land in the summer of 2009 because, although most people now work in the nearby hospitals or the universities, residents are keen to foster a sense of community and there are many opportunities to get together and make merry: the St George’s Day supper, the bric a brac sale, daffodil day at the Manor. The book group, the lads’ night out, the Harvest supper. The people of Elsfield work very hard to build a feeling of togetherness, and while there are tensions, as there are within any community, they generally succeed, making the village a happy place to live and to come home to at the end of the day.