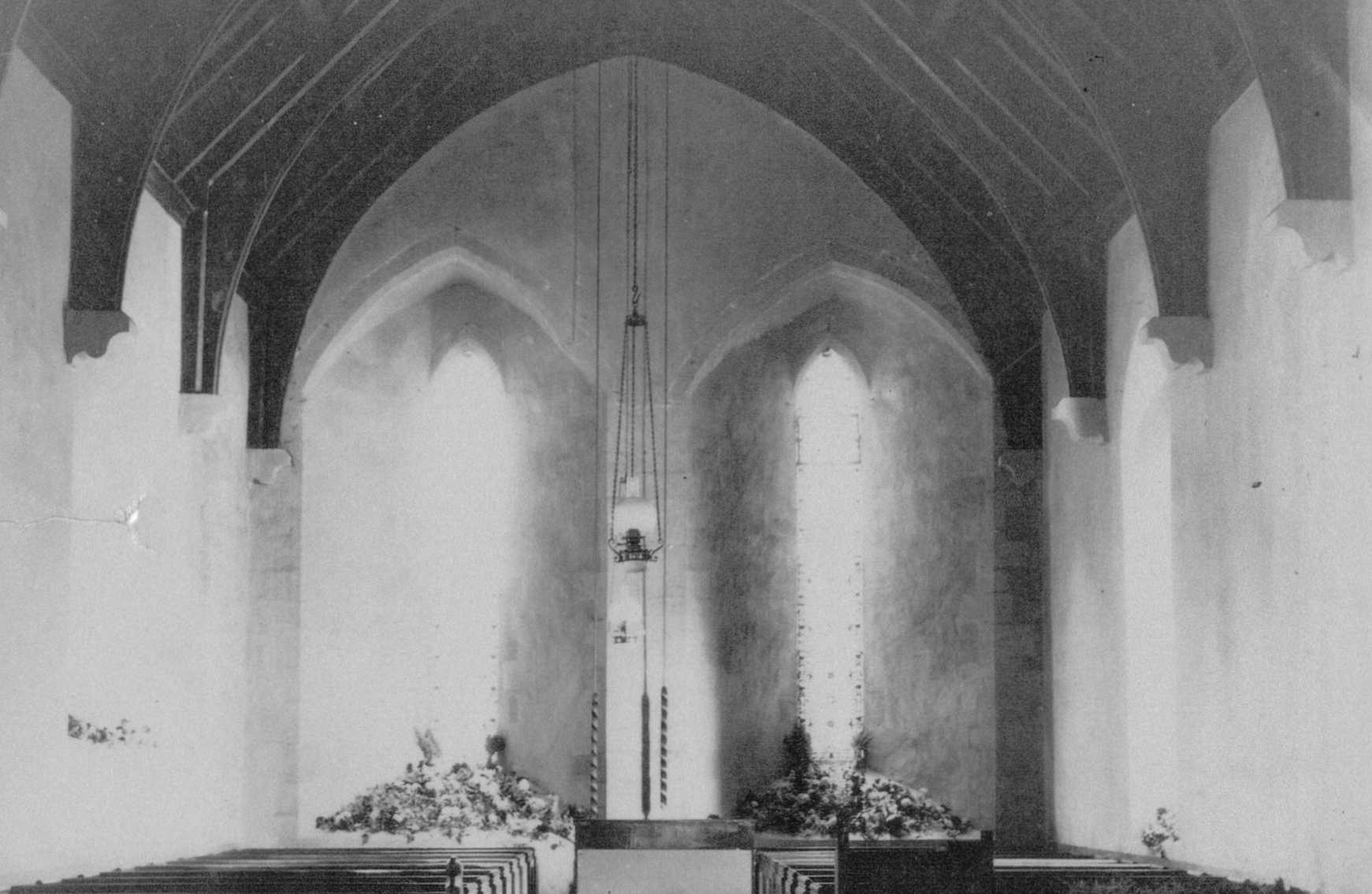 St Thomas of Canterbury, to whom Elsfield church is dedicated, was one of the most popular English saints of the Middle Ages, and his shrine at Canterbury Cathedral was for centuries one of the leading pilgrimage centres for Christian pilgrims from all over Europe.

Thomas Becket (1120-1170) was a well-connected Norman who became a member of the household of Theobald, Archbishop of Canterbury. After studying Law on the continent, he was promoted by his patron to the position of Archdeacon of Canterbury. Before long he was head-hunted by King Henry II, who made him his Chancellor. The two men were great friends, and enjoyed hunting together, and living the good life. Becket even joined in military expeditions in France, and played an active part in the fighting there. Under Archbishop Theobald, the Church had been asserting its power and authority against the secular power of the State. So when Theobald died in 1161, Henry saw his chance to try to curb the Church’s opposition by making Becket Archbishop.

Becket quickly proved the truth of Jesus’ words, “No man can serve two masters” (Matthew 6.24) In spite of the strength of his friendship with Henry, he saw that in his new role, he must put his allegiance to God first, before every human loyalty. This soon led to tension between him and the King, and years of exile during which Becket was forced to flee to France. It was on the occasion when, following an attempt at reconciliation, Becket had returned to Canterbury, that the famous final rift between them occurred. Becket had again refused to give in to the King’s wishes, and in an outburst of fury Henry cried, “Who will rid me of this turbulent priest?” Four of his knights heard him and, hoping to curry favour with the King, hurried to Canterbury where they burst into the Cathedral, fell upon the Archbishop and slaughtered him in front of his horrified clergy. 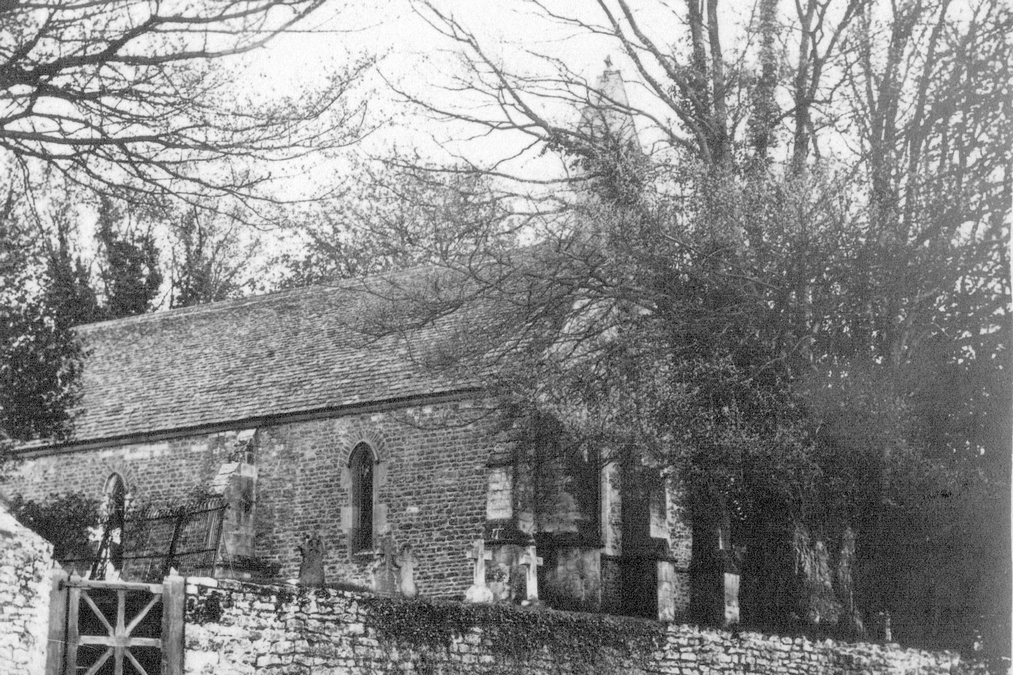 The shock waves from this foul deed of murder and sacrilege spread throughout Christendom. Becket died on December 29, 1170. Within 3 years, on February 21, 1173, he had been fast-tracked for canonisation, and declared a saint by Pope Alexander III. On July 12, 1174, his old friend and enemy the King did public penance at his shrine on Canterbury. Becket had won, and the Plantagenet monarch was forced to acknowledge that God is indeed ruler over the kings of earth.

Many English churches of the late 12th and early 13th centuries were dedicated to the new saint, and so it was in Elsfield, where the present church was dedicated on July 7, 1273. This was the Feast of the Translation of St Thomas, the anniversary of the day in 1220 when Becket’s remains were moved to their splendid new resting place in the choir of the Cathedral. Reginald, Bishop of Cloyne, consecrated and dedicated the new church on behalf of the Bishop of Lincoln, whose diocese at that time included Oxford.

And so to this day the church stands as a holy place, the centre of Elsfield’s community, and a witness to the priority of God over every other loyalty. 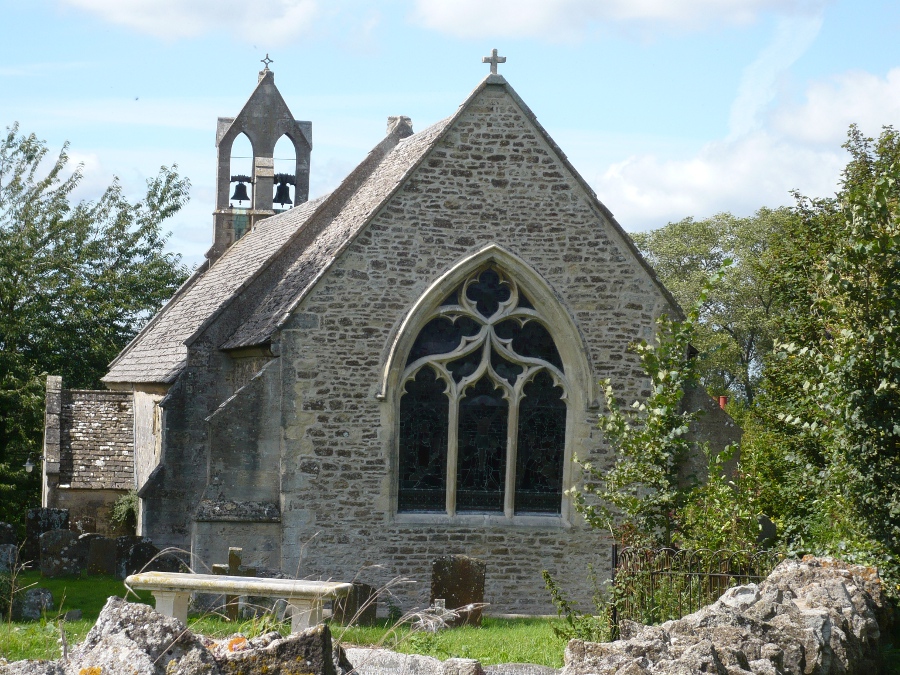 It is highly likely that there was an earlier church building in Elsfield. The Augustinian canons of St Frideswide’s, one of the great monasteries which owned so much of the land around Oxford, claimed that Elsfield had been granted to them by King Ethelred in 1004, along with Marston and Headington, but this has been disputed as Elsfield is not actually named in the deed. The first indisputable mention of a church here is in 1122, when King Henry I granted it (or confirmed that earlier grant?) to St Frideswide’s. Throughout the 12th century, it is referred to as a chapel.

The earliest surviving parts of the present church building are the chancel arch, dating from 1170-80. The plain, tub-shaped Norman font, set on a square base, which faces the door, also dates from before 1200. The major rebuilding took place in the early 13th century, prior to its rededication in 1273. What remains from that rebuilding can be seen in the greater part of the walls, and the trefoiled piscina on the S. side of the sanctuary, where the sacred altar vessels were washed.

The lancet windows on the N. and S. of the chancel, and the low-side window on the S., are faithful restorations of what was there before. In the latter, the sill was made into a book-rest to provide natural light for the priest at prayer.

At one time there was an additional aisle on the N. side of the nave, whose blocked arches were still visible in the N. wall in the early 19th century when further restoration work was done. The restorations of 1849 and 1859 were “quite severe”, but it is thanks to them that the general Early English appearance of the church is so clear-cut.

The pulpit is Jacobean, made in the early 1660s. The altar rails are dated 1672, and the altar and credence table are from the same period. The mosaic behind the altar, depicting the Last Supper, and inspired by the painting of Leonardo da Vinci, was made in 1860 by Salviati, the Venetian developer of ‘mass-produced’ methods of mosaic production.

Church and Parish in Elsfield 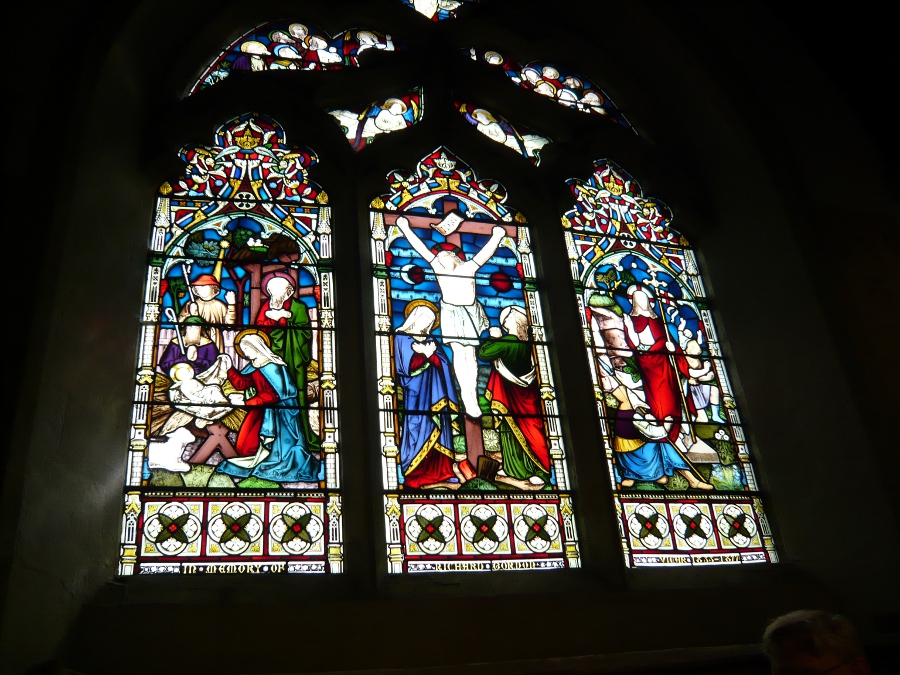 Elsfield has always been a very small parish, and its church life faithful rather than dramatic. Until the Dissolution of the monasteries, it belonged to St Frideswide’s and was part of the manor of Headington, which also included neighbouring Marston. When the monasteries were dissolved, the living passed first to Cardinal College, and then to Henry VIII’s College (what is now Christ Church). Later the advowson passed to the lord of the manor, and this was the situation until the 20th century.

For much of its history, Elsfield was served by stipendiary curates or other non-resident clergy. One of these, in the 18th century, was Francis Wise (1726-1767), whose memorial, in Latin, is on the N. wall of the chancel. Wise was a noted scholar and eccentric, and a friend of Dr Samuel Johnson. Boswell tells us that in 1754, on a visit to Oxford, Johnson walked out to Elsfield three or four times and was greatly impressed by Wise’s library and his gardens, which he had fitted up “in a singular manner, but with great taste.” These gardens form what is now part of the grounds of the Manor House.

Wise used to conduct two services on Sundays, catechised in Lent, and celebrated Holy Communion three times a year, at which there were around 20 communicants. There were no nonconformists in the parish, just one farmer’s wife was “a papist”, but Wise recorded that she was bringing her children up in the Church of England. 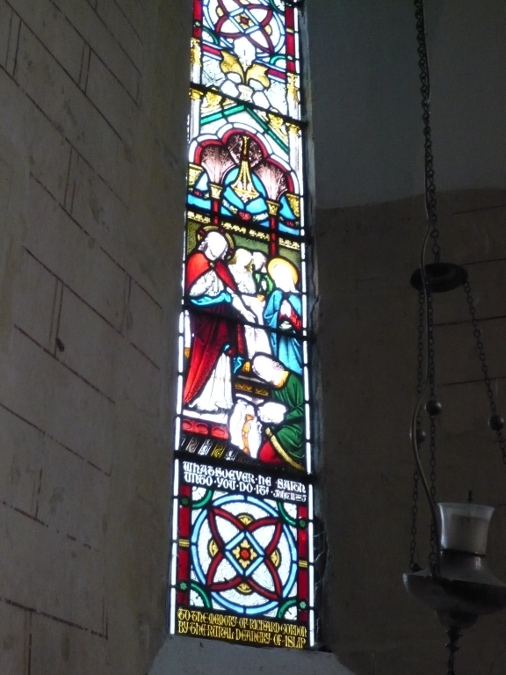 Later in the 18th century, the parish was served by Dr Gilbert Parker (d.1795). He complained in a report to the Bishop of three newcomers to the parish, brothers who rented a farm, and were rigid Anabaptists, though they showed their faces in church from time to time. Worse than them, however, were two masons who absented themselves incorrigibly, and the wardens did not care to prosecute them. Parker wrote, “Their motive seems to be chiefly stupid obstinacy and perverseness. There are too many more, in this tiny hamlet, like them.” The tradition of churchwardens not prosecuting non-attenders continues to this day; but the clergy have given up bad-mouthing the lay officers of the church.

Change came in the 19th century with the Revd Richard Gordon, who was Vicar of Elsfield from 1832 to 1877, and also of Marston from 1849 to 1872. He lived in Elsfield and paid it more attention, preaching twice a Sunday, celebrating Holy Communion six times a year, catechising on Sundays and sometimes weekdays, and visiting the village school which had been built by 1833. During the 1850s there were about 25 communicants, and the number attending church was about 80, which Gordon reckoned to be a good proportion of the population. This hard-working and popular incumbent is commemorated in the stained glass in the E. window, depicting the major events affirmed in the Apostles’ Creed: the birth of Christ, his Crucifixion, Resurrection and Ascension.

In 1919 the last private owner of Elsfield Manor sold the manor and lands to Christ Church, together with the patronage of the parish. The College in turn sold the manor house to John Buchan (1875-1940), the famous Scottish diplomat, historian, biographer and novelist. It is chiefly what Buchan considered his “shockers” – The Thirty-Nine Steps and the other Richard Hannay novels – that are still read today. Buchan loved Elsfield, which was for him “the fulfilment of a dream” [Buchan, 1982:11], and it was his home for the rest of his life. On his appointment as Governor-General of Canada in 1935, he was given a peerage with the title of Lord Tweedsmuir. When he died in 1940, mourned by admirers all over the world, his ashes were brought home to be buried in Elsfield churchyard.

Ready for the 21st Century 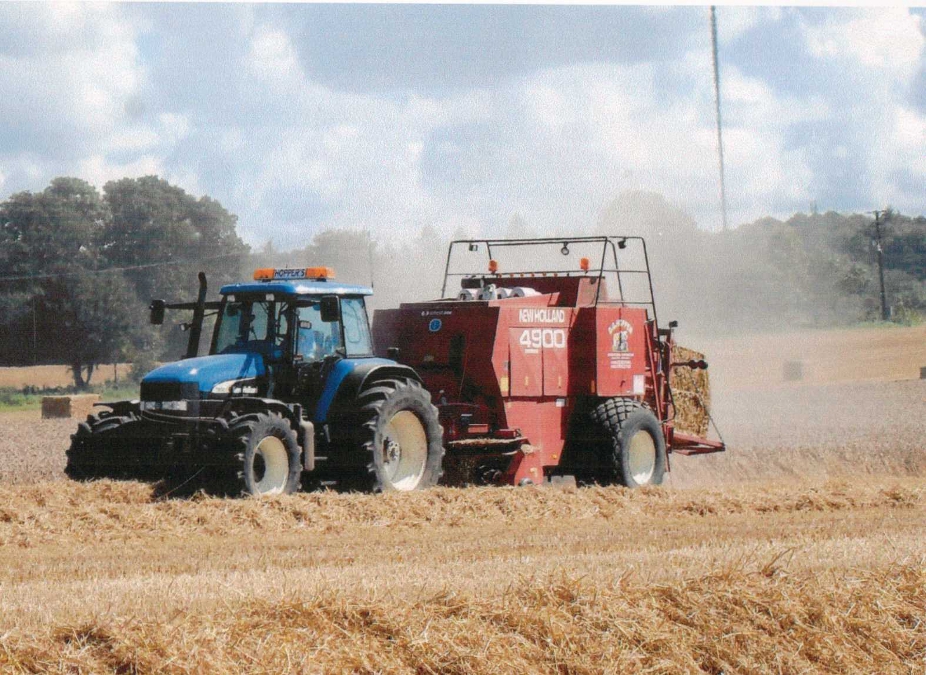 During the 20th century, Elsfield was served by a number of popular and long-serving incumbents, especially William H. G. Elkington (vicar 1899-1939) and Walter Mayo Aste (1939-53) whose memorials are in the chancel. But with the many changes in the finances and clergy numbers of the Church of England, the parish was eventually linked with neighbours in multi-parish benefices. On June 18, 1995, the Archdeacon of Oxford, the Ven. Frank Weston, inaugurated the new Benefice of Marston with Elsfield. This renewed the link that had existed 150 years before under the Revd Gordon.

During the 1990s the retired Dean of Christ Church, Eric Heaton, who was living in Elsfield at the time, suggested using St Thomas’ Church as a community resource for the whole village, in which there were no other public buildings. After several years of hard work in fund-raising, involving the wardens and the whole village, the work was carried out in 2002. Pews were removed from the west end of the nave, and an attractive screen built to convert the area into a village room, together with the addition of an extension where much of the earlier north aisle had been, providing a kitchen, toilet and storage area. With this reordering, Elsfield Church is ready for the 21st century Church’s mission to its community. It is home to a small worshipping congregation, which featured in BBC’s South Today programme in January 2003. And its special atmosphere of centuries-long prayerfulness and worship make it well suited to be part of the Oxford Diocese’s “Quiet Spaces Still Places” network, providing a haven of peace and quiet for busy modern people seeking time with God.

Further details of the church, its history, church services and the new community room are given on the St Nicholas Church Marston website.

The second parish in the Benefice of Marston with Elsfield, is the parish of Elsfield, a delightful though tiny village just outside the Northern Bypass.

In 2002 we carried out extensive work to reorder the church and build an extension to provide a village room, kitchen and toilets for community and church activities. The church itself retains its fine acoustics, and a deep sense of peaceful quietness in which God can speak to our heart.

The Salviati mosaic has recently been restored, and was rededicated by the Bishop of Oxford at a special service in October 2011.